Though most pandemic restrictions have been lifted, organizers chose to hold this year's convention online to protect the health and safety of our members and staff, and their communities and families when they return home.

Summary of the highlights and takeaways from this year's event:

This year PSAC’s 2022 National Triennial Convention was held virtually from May 26 to June 3.

Every three years, hundreds of members representing communities and components from all across Canada attend to discuss and decide the path forward for the organization.

PSAC National’s 2021 convention was postponed due to the pandemic, so the business of this convention set the course for a shorter two year term instead of the usual three-year cycle.

The majority of convention time was spent reviewing PSAC’s financial position and adoption of a new budget for the next two years.

The UNW (virtually) sent a full slate of 15 delegates (plus the UNW President) to represent our component. These delegates were elected back in October 2021 at the UNW convention.

Because of the many unique challenges our members face, it is always important for our members to have a voice at the National table, and this is our opportunity.

Less than usual amount of time was available to debate resolutions on PSAC initiatives, campaigns and changes to the union’s structure and rules, but convention packed in as much debate as they could.

Resolutions that convention did not have time to vote on will be dealt with by the National Board of Directors, no later than October, except any that had budget implications or changes to Constitution.

The UNW Convention delegation had sent one resolution to PSAC National Convention, requesting additional resources assigned to address the grievance backlog. The Collective Bargaining Committee had ranked this resolution #6 in their top 10 priorities, with a recommendation of concurrence. Unfortunately, time did not permit this resolution to make it to the floor for debate.

Some of the notable business and resolutions that were passed:

Aylward was first elected as national president at PSAC’s 2018 National Triennial Convention and previously served as PSAC’s national executive vice-president from 2012 to 2018.

“I am honoured to have the renewed support of PSAC’s membership as we move forward in these uncertain times,” said Aylward. "As we face the challenges ahead, we will continue to fight for fair wages and working conditions that don’t leave ordinary people behind. We have a lot of work to do, not only in the federal public sector, but in the private sector and the territorial sector. I will work with all of you to make sure that the needs of workers are always put first and are always foremost in this union."

“It’s been a privilege to serve as national executive vice-president for the past two years, and I am grateful our members have put their faith in me to continue to represent them,” said DeSousa. “We've already celebrated so many successes together, and I believe together, united, we can take on any challenge that lies ahead.”

The PSAC National Convention took place virtually over 7 business days. Some of the highlights this year include:

Delegates to this year's PSAC National Convention were treated to a special presentation by Bonnie Robichaud, a Canadian labour activist and public speaker whose campaign against sexual harassment ultimately led to a Supreme Court decision that employers are responsible for maintaining a safe, respectful, harassment-free workplace.

Robichaud documented her experience in her memoir, It Should Be Easy to Fix, which was published on March 8, 2022 - International Women's Day.

Robichaud was a working-class mother in 1987, employed as a cleaner at the Department of National Defence. For years, she suffered sexual harassment at work, and went on to lead a movement that changed the lives of countless women who have faced harassment and discrimination at work.

“The system is designed for women not to win, but I broke through that system. At times it’s still difficult. People say, ‘Put it behind you!’ But it’ll never be behind me. And I’m sure there are a lot of women who will never leave it behind them. I decided that writing a book was really important because if we don’t write our history, then it won’t be written,” Robichaud told the Workers’ History Museum.

Thanks to her efforts, for the first time, employers across Canada were declared responsible for maintaining a safe, respectful and harassment-free workplace.

“I just kept showing up,” said Robichaud. “They finally figured out that I wasn’t going away and wasn’t crumbling.”

It Should Be Easy to Fix is available from Between The Lines Press and bookstores across Canada.

In collaboration with Indigenous communities and in the spirit of reconciliation, PSAC launched its second campaign to demand safe, clean, water for all during this year's National Convention.

Despite repeated promises dating back to 2015 from Prime Minister Justin Trudeau to end long-term water advisories by 2021, the government has failed to meet the deadline, and many First Nations continue to have unreliable access to clean, safe water.

PSAC first launched the Thirsty for Justice campaign in 2016 in partnership with Grassy Narrows, a community whose water supply has been contaminated with mercury and other pollutants for more than fifty years. Since then, all of the population has been harmed by mercury poisoning and, in fact, Grassy Narrows community leader Steve Fobister and his father, former chief Simon Fobister Sr., both of whom were featured in the 2016 video, died of mercury poisoning.

Corporate pollution, inadequate filtration and repair, and environmental factors all result in hundreds of thousands of people being exposed to unsafe or even poisoned water supplies.

“In the last 10 years, we've had so many boil water advisories, people have learned not to trust tap water. Anishnaabe people are fighting to survive,” says Judy Da Silva, a Grassy Narrows mother and grandmother who is featured in the video. “The government must make better decisions to protect water. They approve permits and make decisions about industry operating in our territory.”

Grassy Narrows is only one of hundreds of communities in Canada that don’t have access to safe, clean, water and most of them are Indigenous communities or on First Nations Reserves.

Still Thirsty for Justice, begins where our first campaign left off, visiting the communities of Grassy Narrows and Samson Cree, and broadening the picture of how the water crisis is impacting many others across Canada and the First Nations – including PSAC members. 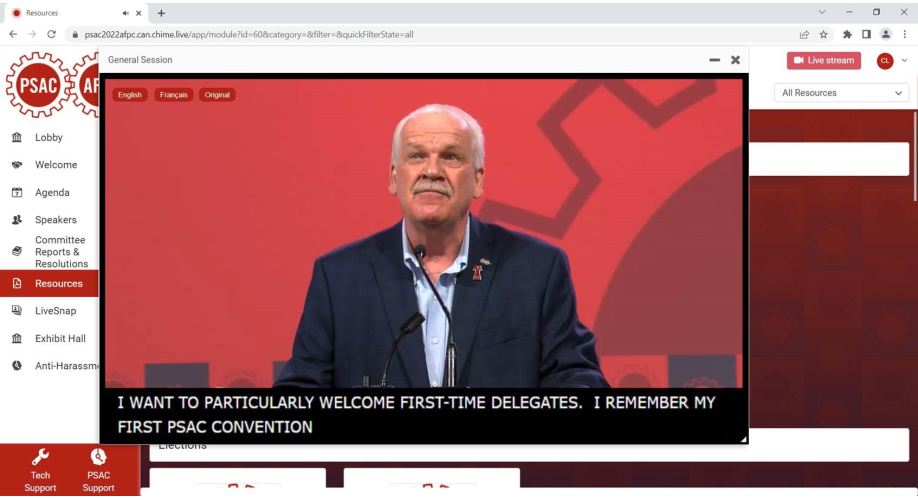 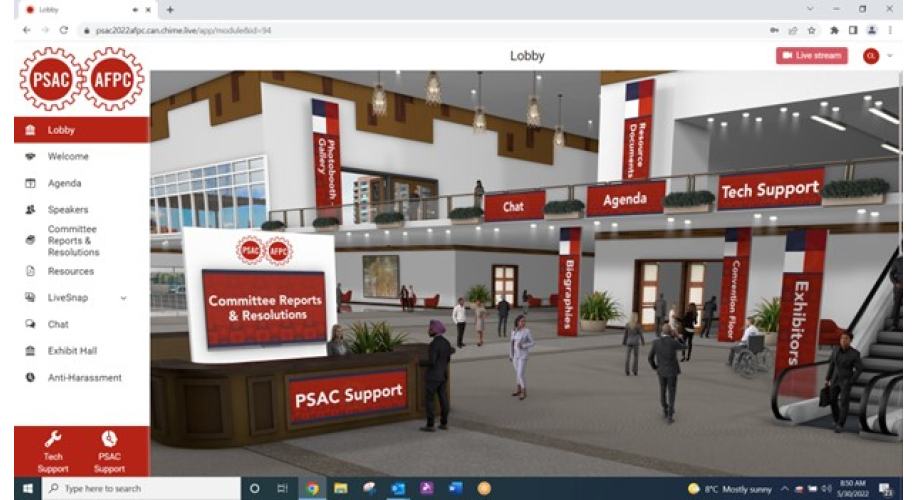 Delegates signed in to a "virtual convention centre" 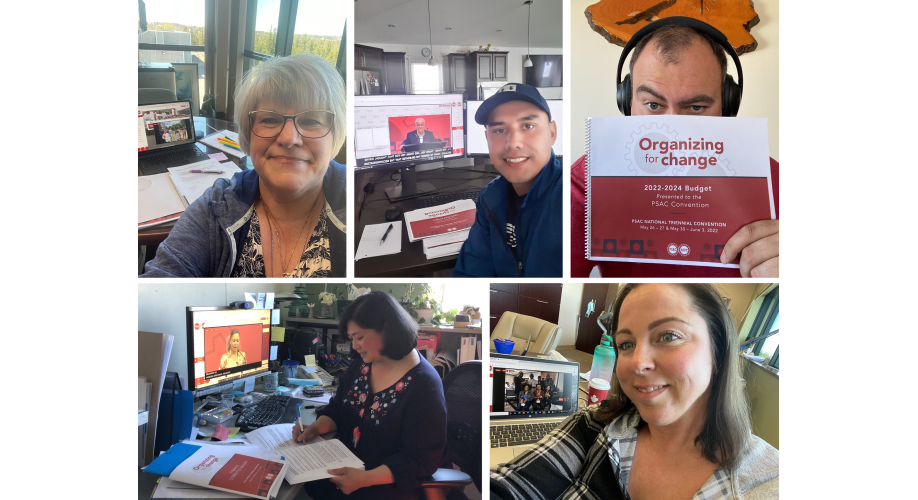 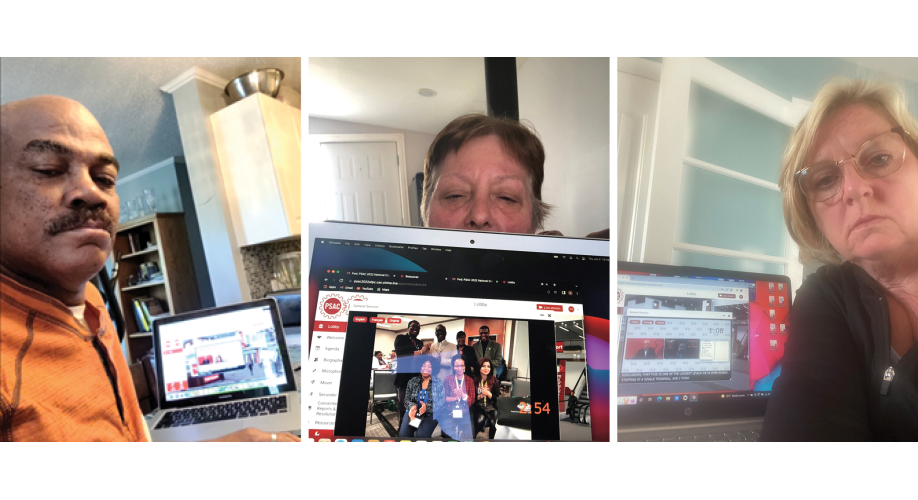 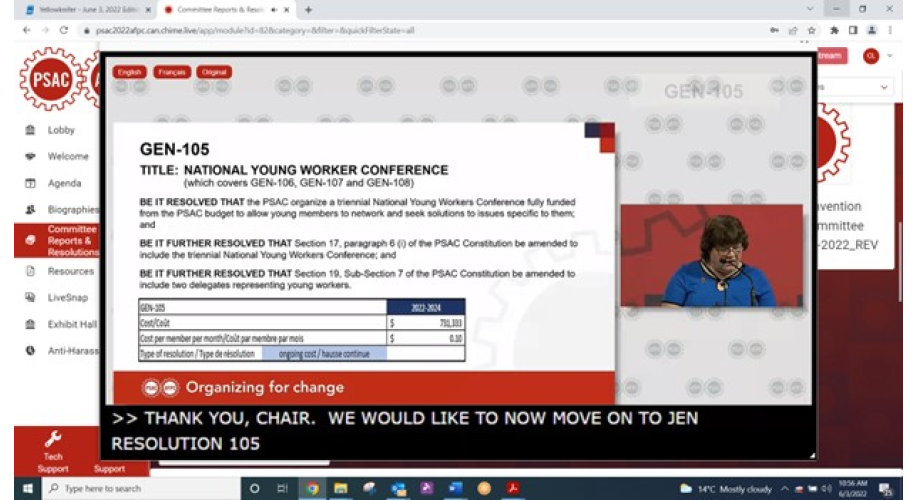 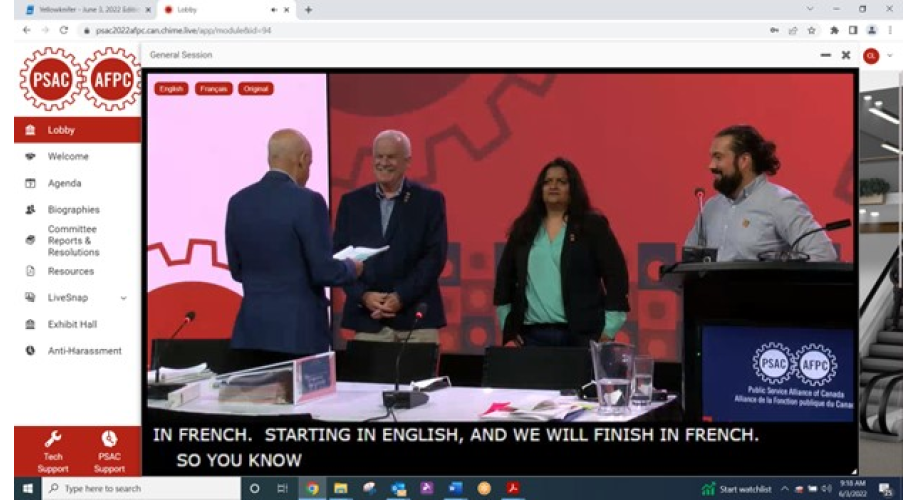 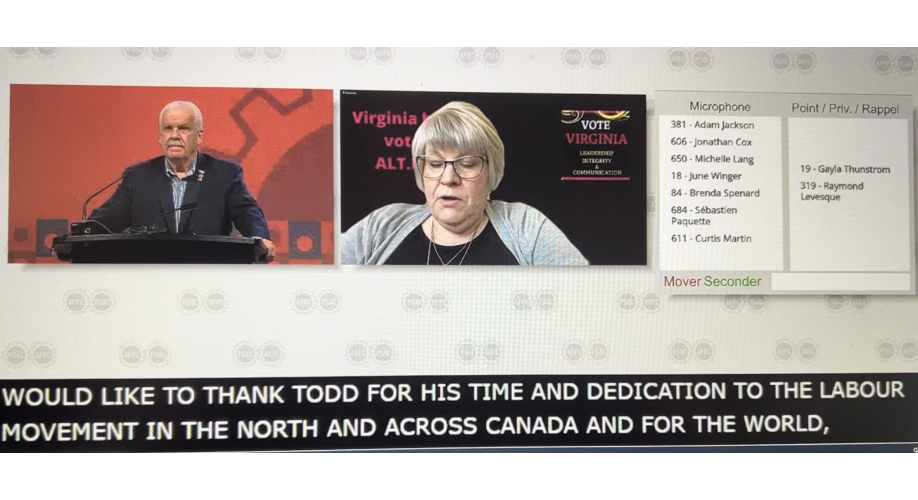 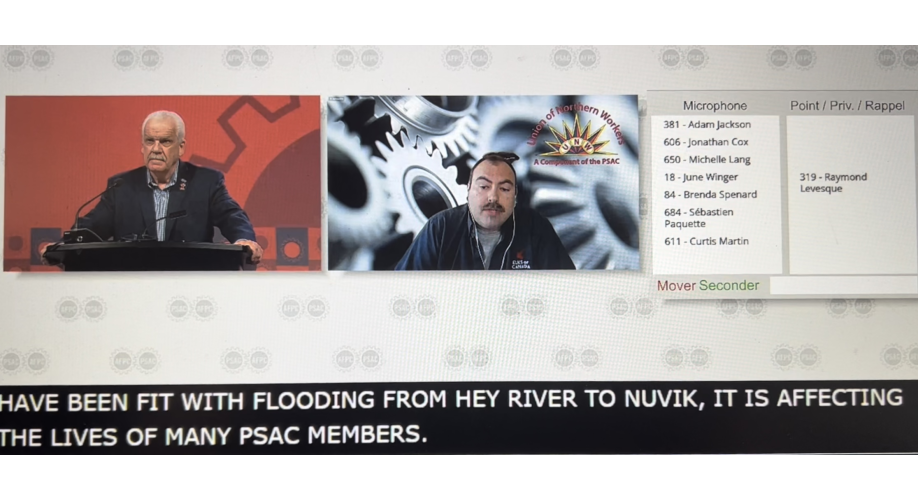 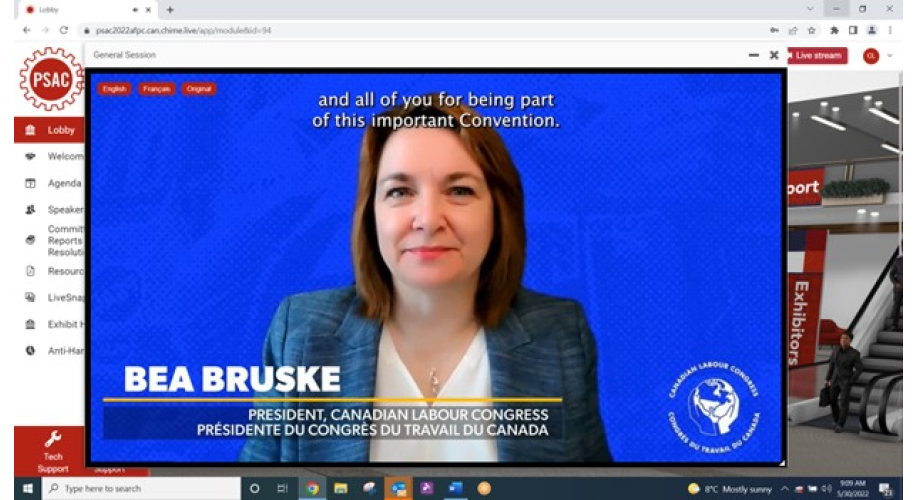 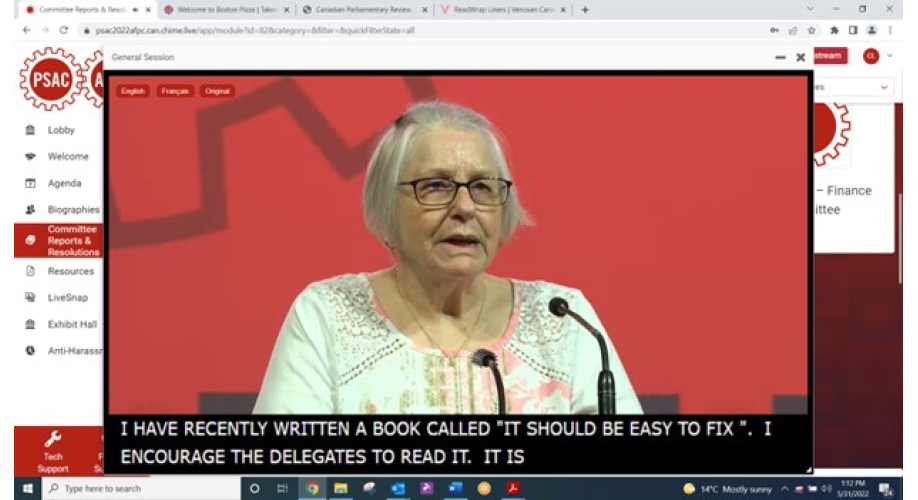 Labour Activist and PSAC Lifelong Member Bonnie Robichaud talks to the delegation about her memoir, It Should Be Easy to Fix 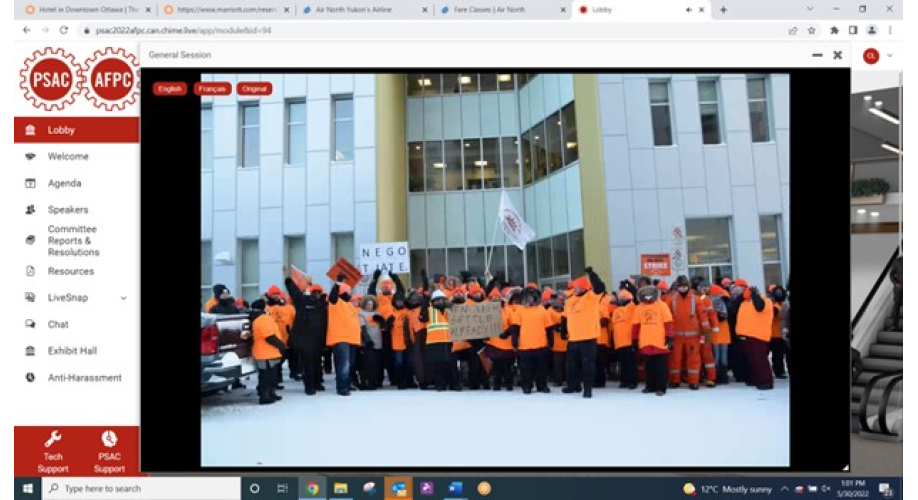 UNW workers were highlighted in a slideshow featuring members from across Canada. 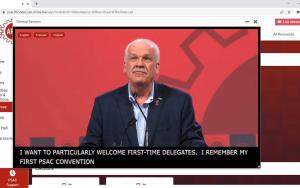 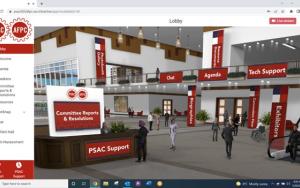 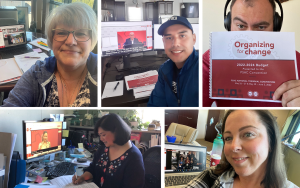 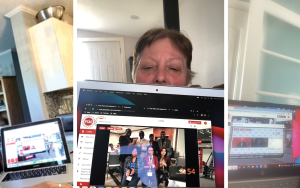 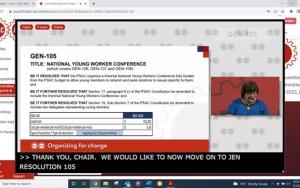 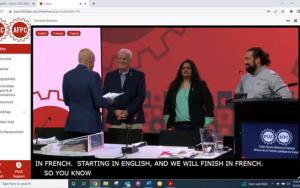 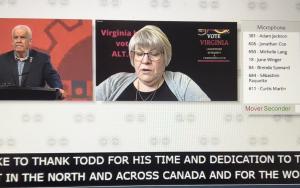 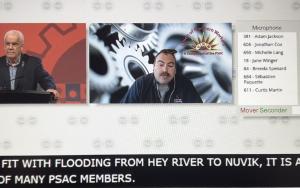 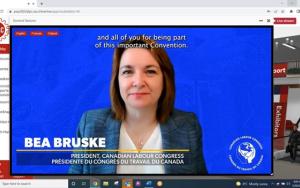 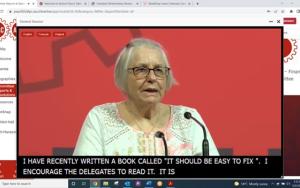 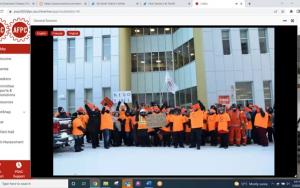